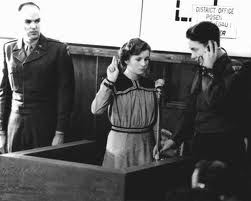 What made the case powerful and persuasive was not only that my client was harassed and verbally abused leading to emotional distress that forced her from the workplace, but five other women had the same experience! But that was not the important part, the important part was that they showed up and testified!

I evaluate cases every day and these is some of the detail that people forget.  That is, evidence is eventually presented to a judge or jury or neutral arbitrator and people need to present the story.  You need witnesses to corroborate your client’s version of events.  If you don’t, you stand alone and it is tougher to be persuasive in that situation.  The defense can raise issues that may undermine the credibility of your client’s testimony.

For the client it is much tougher as well, it is tough to stand alone – anywhere!

Five Is  A Lot Of Witnesses

In this case, these women—who all had claimed themselves to a lesser degree than my client– but personally decided they did not want to challenge their employer for various reasons. All are valid and real and must be addressed when assessing the evidence you may try to bring to the trial.

They were in a small industry (Veterinary) and would not want to be known as a complainer or someone who could potentially sue their boss.  Any employer is a future reference, so it is difficult to challenge them when they might poison you later in such a small industry.

So most people even in a bad situation just try to escape and chalk it up to experience. They just wanted to move on and not create a lot of issues.

Think of why people work – other than the obvious. Most people may enjoy the job (in this case an opportunity to work with animals) and thought they would learn something. They would train and maybe get more responsibility and then move up or out to a new position where they could further advance.

In this case for them then things went terribly wrong! They were being badgered and harassed. And in some instances they blamed themselves.

But in our case they showed up, this was not easy for any of them. Some were terribly nervous and did not want to confront the boss. Others were motivated by each other to testify and tell a story of their own experience with the employer that proved that my client worked in a hostile work environment.

Five is a lot of witnesses and they all told a compelling story so that the hearings officer could conclude that, in fact, the workplace was out of control.

As you think about potential litigation think of evidence and witnesses and do they have the courage to stand tall and tell their side of the story. It is hard. Some people will not do it even if it is in their best interest to do so.